George Eliot’s links with Nuneaton and Warwickshire begin with her birth on 22 November at South Farm, Arbury and her childhood at Griff House, where she moved to when she was a baby.

Her first school was a Dame school opposite the gates of Griff House. The second school was Miss Lathom’s school at Attleborough, and the third was The Elms in Nuneaton. All those buildings have now gone. Her fourth school was Nant Glynn at 29 Warwick Row in Coventry, which still stands and is an estate agent’s office.

Her Coventry home is in what is now George Eliot Road in Foleshill. She attended Holy Trinity Church in the city centre and visited her friends the Brays at ‘Rosehill’ on Radford Road (now demolished). She visited Leamington and Kenilworth Castle.

George Eliot’s birthplace, South Farm (then known as Arbury Farm) is set in the heart of the estate at Arbury Hall where her father was employed by the Newdigate family. Because of its situation, it is not possible to see the house from the outside, except on the special tours organised by the George Eliot Fellowship. It is still the home of the agent to the estate, as it was in Robert Evans’s day.

Griff House still remains, although much changed inside and enlarged on its west side. It is now a restaurant and hotel. One part that is similar to how it was in Mary Ann’s day is the hallway with its flagstone floor. George Eliot described Griff House as similar to Dorlcote Mill in ‘The Mill on the Floss’, and the attic where Maggie and Tom played is the attic at Griff House, now part of the manager’s flat. The round pool has gone but was recreated in the grounds when it became a hotel, though it may not be in the exact vicinity of the original. The grounds are very much changed, and the house is now cut off from its position as part of the Arbury estate by the A444 dual carriageway and was sold in 1972.

Mary Ann was baptised at Chilvers Coton Church in November 1819, a church she described as Shepperton Church in ‘Scenes of Clerical Life’. Indeed, her first lines of published fiction recall its ‘substantial stone tower…and its intelligent eye, the clock…’ In the churchyard is the tomb of her parents, Robert and Christiana Evans and their twin sons who died in infancy. Her brother Isaac is also buried in the churchyard. Astley Church near to Nuneaton is Knebley Church in ‘Scenes of Clerical Life’ and the nearby castle ruins were Knebley Abbey.

Arbury Hall, the home of Viscount and Viscountess Daventry, is Cheverel Manor in ‘Mr Gilfil’s Love Story’ one of the three ‘Scenes of Clerical Life’. Some of the rooms in the Hall are realistically described in their gothic glory in the story – the chapel, the saloon, the drawing room, the cloisters and the dining room. Arbury Hall opens to the public over summer bank holiday weekends.

In these first published stories, Nuneaton became Milby and the parish church of St Nicolas is Milby Church and appears in the third story, ‘Janet’s Repentance’. In this story, Dempster House once stood where the George Eliot Memorial Garden is now situated. The immediate area was bombed in May 1941 and reconstruction of the town centre obliterated scenes which George Eliot knew as a girl.

Griff Hollows, the area between Griff and the town was ‘Red Deeps’ where Maggie Tulliver had secret meetings with Philip Wakem in ‘The Mill on the Floss’ and had been a childhood playground for Mary Ann and Isaac. Gypsy Lane and its 19th-century gypsy encampments may have inspired the story of Maggie Tulliver running away to join the gypsies.

Stockingford is described in ‘Janet’s Repentance’ as Paddiford Common and Stockingford Church is the chapel there; it was initially a chapel of ease. In this area, Mary Ann saw a weaver with a linen pack on his back and it is thought this is what inspired the story of ‘Silas Marner’.

The ‘George Eliot Hotel’ in Bridge Street, Nuneaton was once ‘The Bull’ and was thought to be the origin of the ‘Red Lion’ in ‘Janet’s Repentance’, where Janet’s husband, Lawyer Dempster, drank heavily and took snuff.

‘Adam Bede’ grew out of many of her father’s reminiscences of his childhood in Derbyshire. In the book Staffordshire is Loamshire, Derbyshire is Stonybridge and Derby is Stoniton. Ellastone in Staffordshire is Hayslope and Norbury, where Robert Evans was born, is Norbourne. Dovedale appears as Eagledale, Wirksworth is Snowfield, Ashbourne is Oakbourne and Rocester is Rosseter. In Wirksworth there is a museum in which there is memorabilia about Elizabeth Evans, Mary Ann’s aunt, who told her a story which became that of Hetty Sorrel. Hetty’s trial is undoubtedly set in St Mary’s Guildhall in Coventry.

The use of Griff House, Griff Hollows and Dorlcote Mill have already been mentioned but, in spite of these connections, ‘The Mill on the Floss’ is set in Gainsborough in Lincolnshire, as a tidal river was required for the climax of the story. Local people like to identify places in their area but the only one to bear any weight is the Old Hall in Gainsborough where the bazaar was held.

‘Felix Holt, the Radical’ is undoubtedly set in the Midlands, particularly in North Warwickshire. Treby Magna has been suggested as Coventry, Little Treby as Stoneleigh, near Coventry, and Stoneleigh Abbey as Transome Court. The coachman’s ride at the beginning of the book describes the road past Little Treby and on past Transome Court accurately if it is to be identified as Stoneleigh.

‘Romola’ is set in 15th century Florence and the places described in the book can be easily identified: San Marco, Palazzo Vecchio and Palazza Corsini. Il Duomo is where Tito disowns his father; Tito’s lodgings are in Piazza S. Giovanni. San Marco was visited by G H Lewes alone as women were not allowed, but George Eliot described the frescoes in San Marco. Savonarola’s death in Piazza Della Signoria is taken into the novel and Tito escapes from the mob by swimming in the Arno from one bridge to another. Tito meets Fra Luca, Romola’s brother, on the Ponte Vecchio. All can still be seen.

‘Middlemarch’ is loosely based on 19th century Coventry, although none of the buildings can be identified, only circumstances like the coming of the railway and the need for a fever hospital.

In the final novel, ‘Daniel Deronda’, Lacock Abbey in Wiltshire is thought to be Topping Abbey, the home of Sir Hugo Mallinger. The synagogue visited by Daniel is the synagogue in Frankfurt in Germany.

Audio podcasts celebrating the 150th anniversary of the publication of George Eliot’s first work of fiction Scenes of Clerical Life. 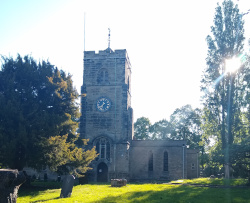 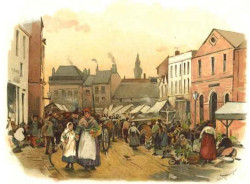