George Eliot was an avid letter writer and the letters held by the library are a very small sample of those written by her or to her by friends and family. Some held in the Collection were written by family and friends after her death.

Most of her letters are transcribed in Gordon Haight’s The George Eliot Letters, Yale University Press 1955 (9 volumes) which can be viewed in the library.

The collection is divided into the following groups.

Contemporary letters by or to George Eliot and George Henry Lewes

Letters from and to members of Isaac Evans’s family, particularly his son Frederic, extending well into the 20th century. Placed with Nuneaton Library by the George Eliot Fellowship, the letters are of considerable interest to local historians and those interested in the family responses to George Eliot in the 30 years or so after her death.

Miscellaneous letters and other items 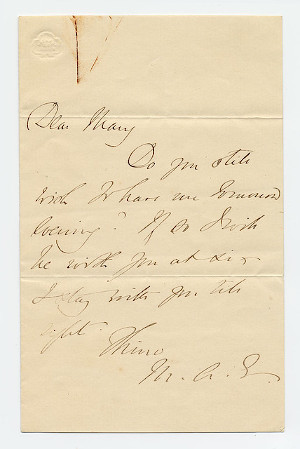