If books do furnish a room then a sizeable house could be furnished with the critical works devoted to George Eliot. A veritable industry of George Eliot research, biographies and critical studies have kept university scholars busy since the war.

If you are new to George Eliot and want to find out more about her without having to commit yourself to a lengthy read, the Pitkin Guide to George Eliot is inexpensive, brief and in full colour. The text was written by the George Eliot Fellowship secretary, Kathleen Adams.

Readers wishing to learn more would be well advised to read Gordon S Haight, who spent much of his life researching and writing about George Eliot, and his biography (1968) is still unsurpassed. He also edited nine volumes of her letters.

In the UK much of the re-evaluation of George Eliot was undertaken by F R Leavis (1948) and by Barbara Hardy (1958, 1970, 1982, 2006) who is still writing with great depth and understanding and illuminating George Eliot in extraordinary ways.

In the last 30 years, there has been an avalanche of work, but for the general reader, new to George Eliot, the following are helpful titles: 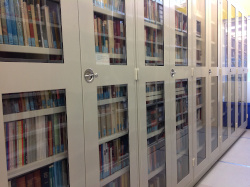 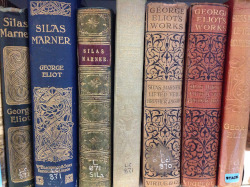 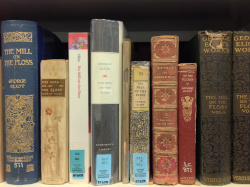 Items from the George Eliot Collection