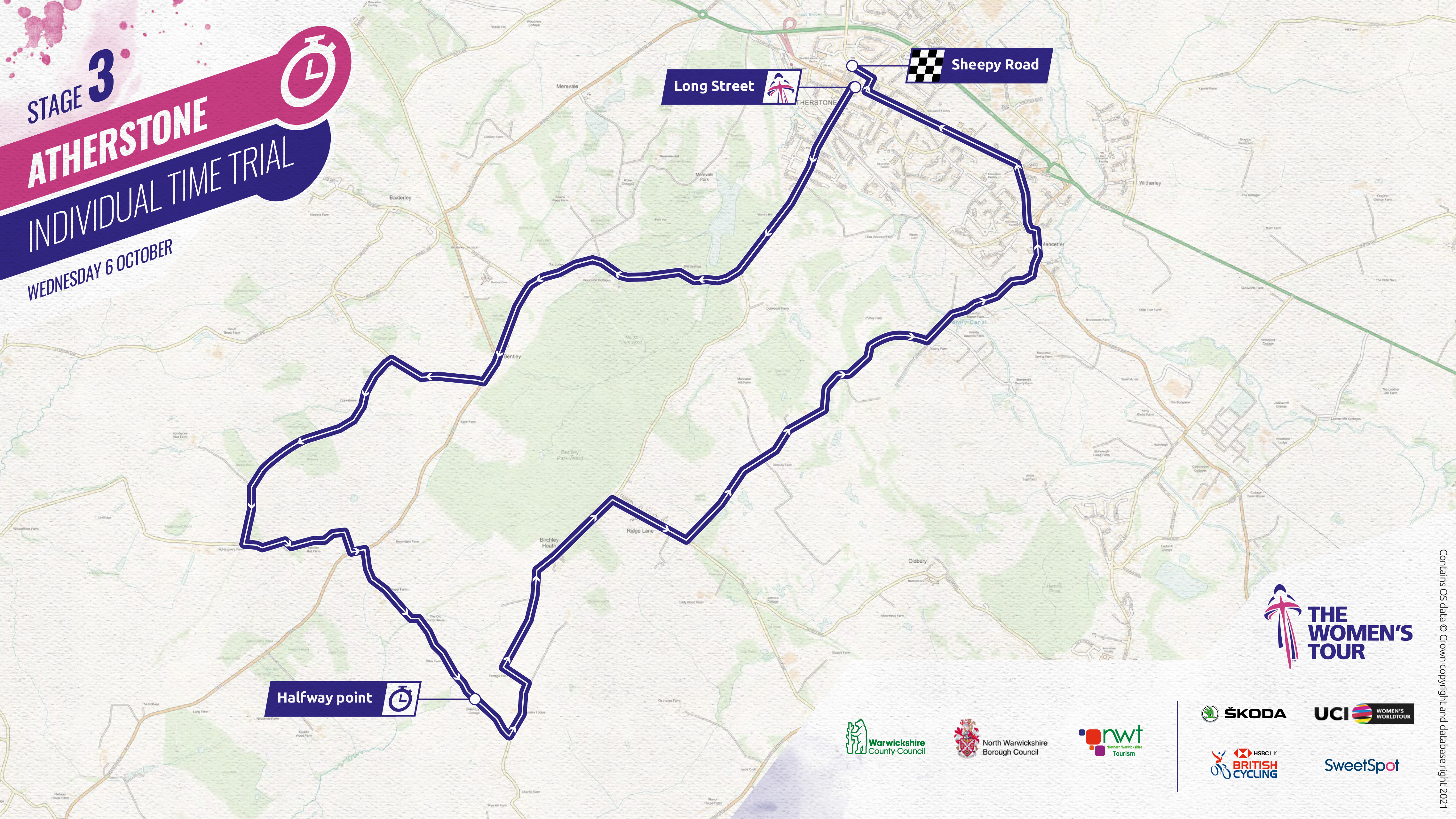 More exciting news for Warwickshire cycling fans as the Atherstone route for the 2021 Women’s Tour is announced.

The full stage routes for this year’s Women’s Tour have now been released, revealing a race that looks set to go down to the wire.

The six-day event (Monday 4 – Saturday 9 October) will feature its first-ever individual time trial stage at Atherstone, in North Warwickshire, while seven of the host venues are new to the race.

Four of the Women’s Tour’s six editions to date have been decided by 11 seconds or fewer; Britain’s Lizzie Deignan (Trek-Segafredo) won the most recent race – 2019 – by just two seconds over Polish rider Kasia Niewiadoma (Canyon SRAM). A similarly close GC battle is anticipated in 2021.

History will be made when Atherstone hosts the first individual time trial in race history on stage three (Wednesday 6 October). Having welcomed three stage starts in Women’s Tour history, this will also mark the first time the North Warwickshire town will host a finish. The out-and-back route has been carefully designed to measure 16 kilometres / 10 miles, a nod to Britain’s rich history of time trialling over that distance. The anti-clockwise loop passes through Bentley, Birchley Heath, Mancetter before finishing in the heart of Atherstone.

Other highlights from the routes include:

Oxfordshire will host the Grand Départ on Monday 4 October, with a spectator-friendly stage between Bicester and Banbury. The 147.6-kilometre route once again covers a large section of the county, heading as far south to Culham and the banks of the River Thames, before visiting Abingdon and Deddington on its journey north towards the finish in Banbury. The stage’s three SKODA Queen of the Mountains climbs all fall within the final 60 kilometres, the last of which at Sibford will be tackled twice as part of a 29.4-kilometre finishing circuit.

The Women’s Tour’s continued desire to innovate is evident on stage two, a kermesse around Walsall and its surrounding areas. The stage will start in the town’s Arboretum, the Victorian park and roll out towards a 10-kilometre, anti-clockwise circuit around Hayhead Woods, Barr Beacon nature reserve and Pool Green. This undulating loop will feature 10 ascents of the Barr Beacon climb – three of which will count towards the SKODA Queen of the Mountains competition – before eventually heading into the town centre and a finish in the shadows of Walsall Town Hall on Lichfield Street.

Three days of racing in the east of England to end this year’s race begin with the Shoeburyness to Southend-on-Sea stage (117.5 kilometres) on Thursday 7 October. Inspired by racing on the flatlands of Belgium and the Netherlands, riders will have to be alert to crosswinds and changes in direction as the route heads through Rochford, South Woodham Ferrers, Burnham-on-Crouch (sprint one), Bradwell-on-Sea, Hazeleigh and Rawreth. The day’s sole SKODA Queen of the Mountains climb at Hambro Hill (4.9 kilometres, maximum gradient of 12.8%) near Rayleigh tops out with just 12.7 kilometres remaining and will likely be the instigator for a fast and frantic run-in to the finish line along the seafront in the Westcliff-on-Sea are of Southend.

Stage five starts at Colchester’s Northern Gateway Sports Park, the stunning new leisure facility that is already inspiring local residents to live a more active lifestyle. Riders will complete a lap of the venue’s closed road cycle circuit before heading into Colchester’s historic city centre. Another spectator-friendly stage, the peloton will pass through the finish line on Clacton seafront after just 32 kilometres before completing a 63.5-kilometre loop via Holland-on-Sea, Thorpe-le-Soken and Manningtree. The Women’s Tour’s two previous stage finishes in Clacton both culminated in bunch sprints, won by Marianne Vos (2014) and Jolien D’hoore (2015). At 95.5 kilometres, this is the shortest road stage of the 2021 race.

This year’s Women’s Tour champion will be crowned in Suffolk following a day of racing between Haverhill and Felixstowe (155 kilometres). A characteristic scenic route through the county will take the peloton past the Melford Hall stately home and through Sudbury before passing along the runaway at Wattisham Flying Station. The route also includes Stowmarket, Wickham Market and Woodrbridge, all of which have featured in historic Women’s Tour stages in the county, before heading south towards the finish line adjacent to the beach in Felixstowe.

Cllr Izzi Seccombe, Leader of Warwickshire County Council, said: ““I am thrilled that Stage 3 route for the Women’s Tour will be taking in so much of historic Atherstone and surrounding villages as competitors race against the clock along the 10 mile long route.

“Now we are looking to cautiously and safely open up our economy more broadly and welcome more visitors to the county, as well as being fantastic entertainment for spectators, this event will be of huge economic benefit to the area. It’s an opportunity for local businesses in Atherstone to celebrate and embrace cycling as the race comes past their front door, as well as for others to maximise on business opportunities from increased customers and visitors to the county.

“Warwickshire has a rich history in hosting high-level cycling events having previously played host to legs of both the men's and women's Tour of Britain over the last few years and has also been selected as the location for the Commonwealth Games Road Race in 2022 demonstrating that the county is a world-class location for cycling and cyclists.”

Mick Bennett, Women’s Tour race director, said: “We are all set for what promises to be another memorable edition of the Women’s Tour! From our first-ever individual time trial in Warwickshire, an innovative stage in Walsall, potential for crosswinds en route to the finishes in Southend and Clacton, plus the bonus seconds that line the route from Oxfordshire to Suffolk, there are plenty of opportunities for the race to come alive!”

Further details of the 2021 Women’s Tour – including stage timetables and competing riders – will be announced shortly.

More information about the Women’s Tour can be found online: https://www.womenstour.co.uk/

Find out more about the Teams that will be taking part: https://www.warwickshire.gov.uk/news/article/2289/world-s-best-cycling-teams-announced-for-the-women-s-tour-coming-to-warwickshire-in-october-2021