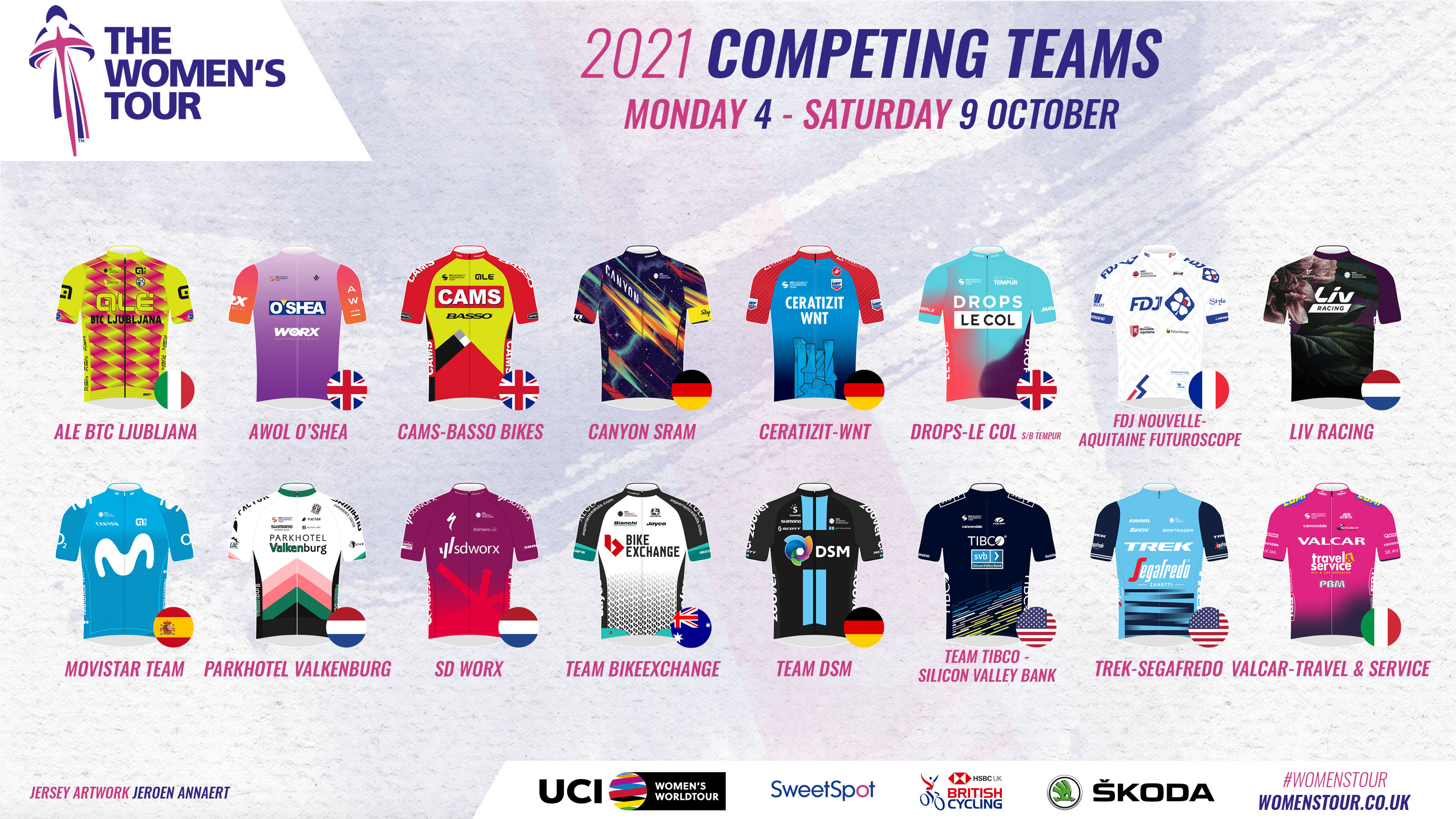 Exciting times for cycling fans as the teams for the 2021 Women’s Tour are announced.

Twelve of the world’s top 15 teams will be among those in action at this year’s Women’s Tour (Monday 4 – Saturday 9 October), the UK’s most prestigious women’s cycle race.

Rescheduled from its traditional June calendar position due to the pandemic, the race will nonetheless attract an all-star field once again for its seventh edition, with all nine of the top division UCI Women’s World Tour teams confirmed to race.

When the Tour reaches the picturesque town of Atherstone in Warwickshire on Wednesday 6 October, for the third stage of the competition, it will mark the first ever individual time trial stage of the Women’s Tour and promises to be an exciting day of cycling.

British interest comes from the teams of AWOL O’Shea, CAMS-Basso Bikes – both Women’s Tour debutants – and Drops-Le Col s/b TEMPUR. 2021 will mark Drops’ fifth appearance in the event, while the Essex-based CAMS team will be on home soil for the race’s fourth and fifth stages (Shoeburyness to Southend on Thursday 7 October, Colchester and Clacton-on-Sea on Friday 8 October).

The full list of teams competing in the 2021 Women’s Tour is:

Cllr Izzi Seccombe, Leader of Warwickshire County Council, said: ““I am thrilled that Warwickshire will once again be hosting a stage of the Women’s Tour. As well as being fantastic entertainment for spectators, this event is of huge economic benefit to the area. It’s an opportunity for local businesses in Atherstone to celebrate and embrace cycling as the race comes past their front door, as well as for others to maximise on business opportunities from increased customers and visitors to the county.

“Warwickshire has a rich history in hosting high-level cycling events having previously played host to legs of both the men's and women's Tour of Britain over the last few years and has also been selected as the location for the Commonwealth Games Road Race in 2022 demonstrating that the county is a world-class location for cycling and cyclists.”

Mick Bennett, Women’s Tour race director, said: “After the challenges that the Women’s Tour has faced since the start of 2020, it is extremely uplifting to know that when we finally return in October our passionate fans will again be able to enjoy watching the world’s best teams and riders along the roadside – all for free, too! We’ve designed a route that will make sure the battle for overall glory goes down to the final day. Roll on October!”

Danelle Every, British Cycling’s cycling delivery director, said: “Year after year, the Women’s Tour attracts the best teams in the world and 2021 is proving to be no different. Despite the disappointment of last year’s postponement, we know that the riders on show – who will be cheered on by brilliant crowds over six days of racing – will make this latest edition one of the most spectacular yet.

“After the explosion in cycling participation that we have seen during the pandemic, we hope that this event will be a fantastic showcase to help us nurture the next generation of female talent and to inspire more women and girls across the nation to have a go at a local cycling event whatever their age or ability.

“We’re incredibly proud of how the Women’s Tour has established itself as a mainstay of the UCI Women’s WorldTour calendar and real celebration of incredible female talent, so we are all eagerly anticipating its return in October.”

Full details of the 2021 Women’s Tour – including stage routes and timetables; SKODA Queen of the Mountains and sprint locations; and competing riders – will be announced shortly.

More information about the Women's Tour can be found online: https://www.womenstour.co.uk/