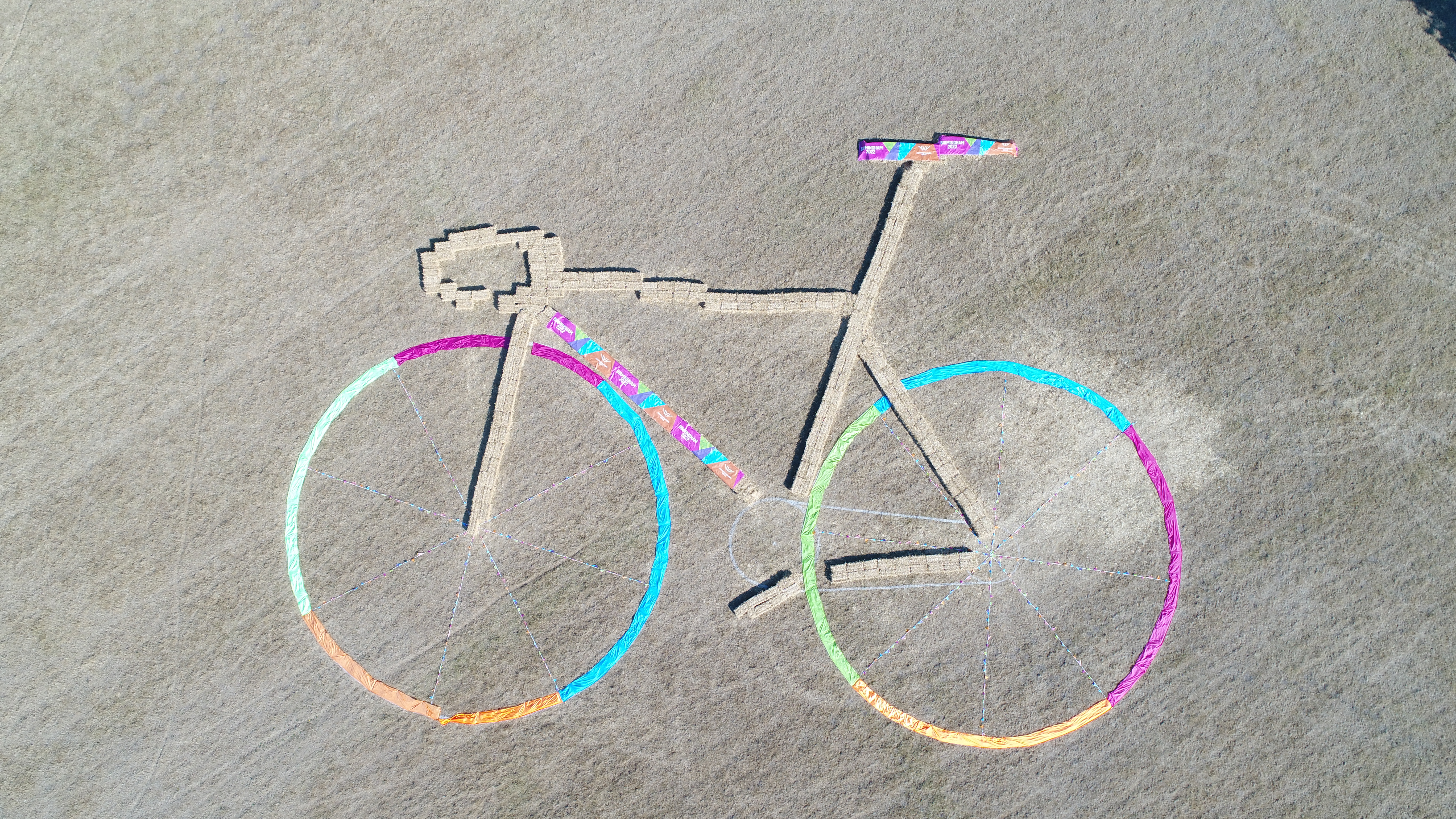 If you were one of the many thousands of people watching the Birmingham 2022 cycling Road Races from Warwick on television on Sunday 7 August, you may have spotted a bike that was somewhat bigger than all the others, and not racing as part of either the Men’s or Women’s events.

Positioned in Warwick Castle Farm Park field, behind the historic castle, the bike’s frame was made from 252 straw bales, each measuring 81 x 46 x 31 cm and weighing 18 kg, with its wheels built from brightly coloured material to match the Commonwealth Games Colours. Together, it measured a colossal 50 x 30 m along its length and height.

The bike was the brainchild of two of Warwickshire County Council’s graduates – Seb Burch and James Sewry – who are taking part in the National Graduate Development Programme for Local Government. The straw bales were provided by a local farmer from Hutsby Farms.

The bike was constructed in around four hours of blazing sun by the two graduates, with support from on-call Warwickshire Fire and Rescue firefighters based at Royal Leamington Spa. Everyone’s hard work was well-rewarded when the bike design featured heavily in television coverage for both the Men’s and Women’s Road Races.

Speaking about the design and construction of the straw bale bike, Seb Burch said: “We’re really happy to have been involved with this project and that our straw bale bike was featured frequently in the coverage of the Road Races from Warwick.”

James Sewry Added: “It was certainly a challenge to deliver this on such tight timescales but fantastic to see it all come together for the amazing events at the weekend. We’d like to say a huge thank you to the crew from Leamington Fire Station and everyone else who gave their time to help make our design become a reality.”

Cllr Heather Timms, Warwickshire County Council Portfolio Holder for Environment, Climate & Culture, said: “We are very proud of our involvement in the National Graduate Development Programme for Local Government and the Graduates that are placed with us. Seb and James are fantastic examples of the calibre of participants in the programme,.These two members of staff are just starting out on their careers in local government, and they got stuck into this particular challenge with plenty of enthusiasm and persistence, which resulted in the creation of a visual icon that was viewed around the world as part of coverage of the Road Races.

“Sunday truly was a fantastic day for Warwickshire! We were treated to a magnificent day of action and excitement thanks to all the competitors and spectators. Once again, Warwickshire has shown that it is the go-to county for hosting world-class cycling events, after the success in recent years of the Women’s Tours and the Tour of Britain.

“We have again made the most of the opportunity to showcase everything the area has to offer to an international audience. With millions watching on television around the world, the event has also been a huge boost to our international recognition.”

The straw bale bike will be left in place for a few more days before being taken apart. The straw will be taken to Warwick Castle with the fragments remaining on the ground biodegrading naturally.

More information about the Commonwealth Games in Warwickshire can be found online: https://www.warwickshire.gov.uk/birmingham-commonwealth-games-2022