The May update on progress towards the A46 Stoneleigh Junction Improvement Scheme.

Throughout April, work has mainly been progressing on the new structures – the new A46 bridge and Westley Bridge along, with some highways work to Stoneleigh Road East and West and the Northbound off-slip.  In the period, the first part of the new Dalehouse Lane roundabout was formed.

There is still a 50-mph speed limit on the A46 mainline to allow safe working for the new A46 bridge construction and will remain in place for the foreseeable future.

The main structural earthwork build-up and embankment grading for the Northbound off-slip embankment is now complete.  At some point in the future, this slope will be covered with a thin layer of topsoil and planted.  Work has continued to install drainage pipework, and this was nearing completion towards the end of the period.  The excavation of the road-box for the carriageway construction was carried out (which is the first part of forming the foundation for the new road), and following this, work has begun to install the road capping and sub-base of the road.  These two layers form the first part of the road foundation and are critical to the stability of the road.  The capping layer has been constructed using recycled crushed bricks and concrete which are then compacted to form a solid layer.  The sub-base has been constructed using an incinerator by-products and has once again been compacted into a solid mass.  Following this, tarmac layers will be overlaid to the finished level and this area of new carriageway construction will form part of the newly aligned off-slip leading to the eventual roundabout at the top of the slip road.

The progress of the works can be seen in Figure 1. 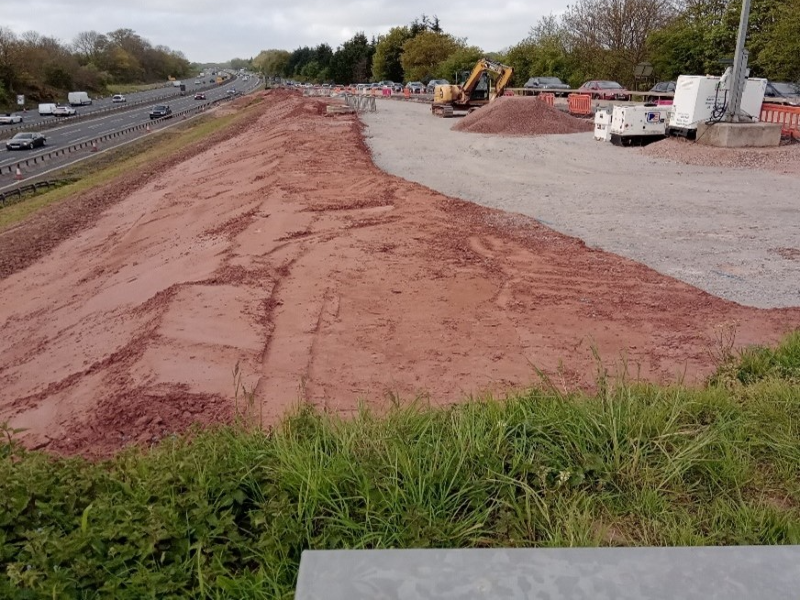 A major milestone was achieved in the period when the temporary sheet piles on both sides of the bridge were started to be removed.  These temporary sheet piles were installed some months ago and created a stable working area within the ground from which the Westley Bridge abutments could be constructed.  Now all that work is completed, they are being removed to allow for better accessibility to the bridge for the next stage of its construction.  The stripped shuttering and exposed abutment can be seen in Figure 2.

Before they were removed, the construction of the abutments were completed.  This was achieved through steel reinforcement being fixed into cages in the areas of the abutment.  Shuttering was then erected and then concrete poured to create each reinforced concrete abutment.  This was completed on both sides of the bridge, followed by an application of a waterproofing layer.  This is largely applied in the same manner as one might paint a wall.  This waterproofing is essential to be applied as parts of each abutment will be buried below ground in the final arrangement and must be able to withstand the ingress of water to prolong the life of the structure.

Following this, it is necessary to construct some revetments.  Revetments are sloping structures created to help structures resist erosion caused by the flow of water.  For Westley Bridge, this involves installing some large stones and compacted on each riverbank in front of each abutment.  One side of the bank also requires the construction of an otter shelf to help otters pass under the bridge in high water level events. 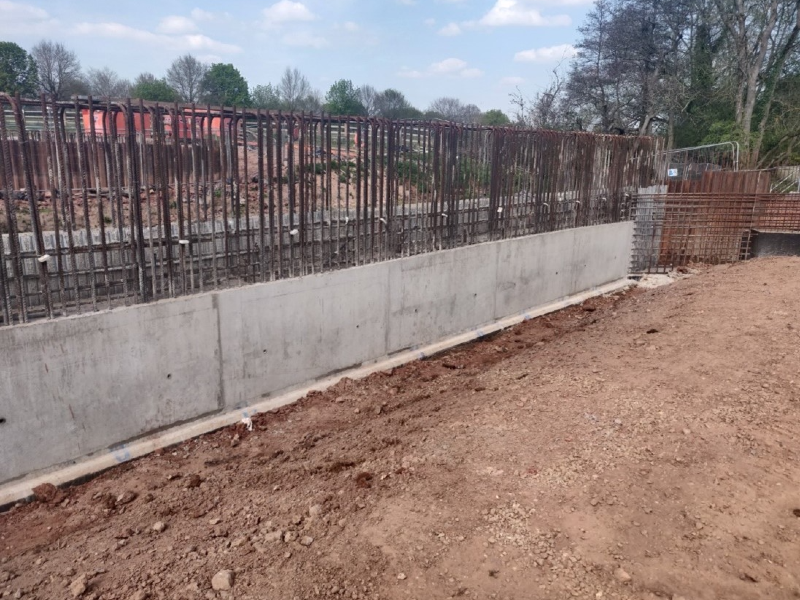 The footpath and cycleway along this area of road has also been progressed, with all concrete edgings and footpath/cycleway subbase now installed and is ready to be surfaced along with the carriageway.  A general picture of the completed area can be seen in Figure 3. 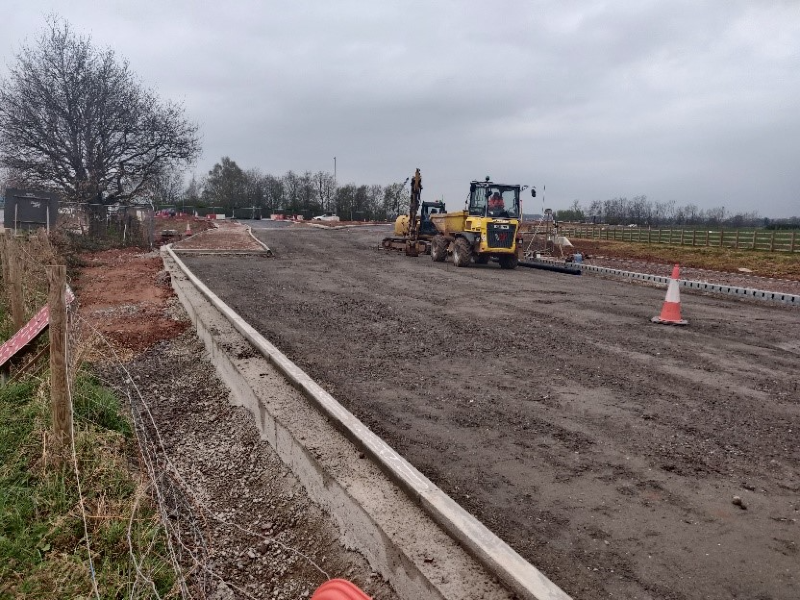 The shape of the dual carriageway link between the West gyratory and new Dalehouse Lane roundabout is clearer as the installation of the kerbing has largely been installed up to the point of the new roundabout.  These kerbs have been installed using both concrete and the recycled plastic combined kerb drains which have been used elsewhere across the site. The subbase for the new carriageway construction has also been installed and compacted to the correct levels and this is in preparation of the surfacing to commence in the coming weeks.

Work has also commenced on the two ponds next to Stoneleigh Road West in.  They have been lined with an impermeable geotextile layer in order to make the ponds watertight.  These ponds are used for storage of water from surrounding drainage, but also to attenuate rainwater run off after a storm.  In addition to the water storage, the ponds will have environmental benefits, as they improve the biodiversity by supporting subaquatic vegetation, and will be seeded with mixes that include native wildflowers, including common reed which acts as a natural filter, removing pollutants and oxygenating the water. Marginal plants and reeds provide important habitats for a wide range of birds, mammals, insects, and amphibians.  Oxygenating plants will also be planted in the ponds which will help keep the water clear and clean, limit the spread of unwanted algae, and allow other forms of pond life to exist.

A picture of the geotextile being installed is shown in Figure 4. 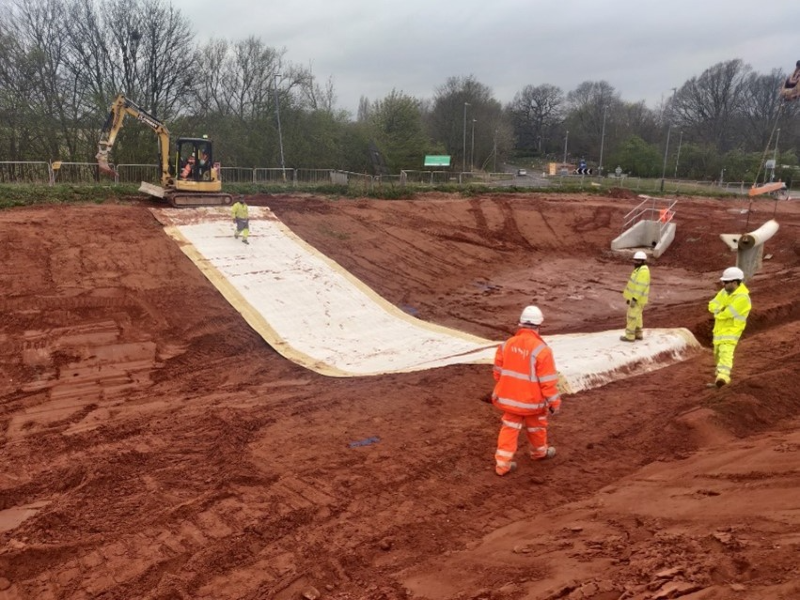 The formwork for the A46 West Abutment has been erected, with steel reinforcement currently being installed within the formwork. The formwork is very tall as it must reach the height of the abutment.  As a result, it must itself be anchored on one side so as to not fall onto the live A46.  This is achieved through props and temporary anchor blocks.  Once this is completed, there will be a concrete pour which will finish the abutment construction on this side. The large formwork and anchor blocks can be seen in Figure 5.

For the East abutment, the steel reinforcement cage fixed as the bottom of the foundation was completed and the foundation cast with concrete.  Once this was completed, early stages of the formwork construction for the East abutment has begun in a manner similar to the west abutment.  This involves installing the concrete anchor blocks which will be used to support the eventual tall vertical abutment formwork.   A crane pad was constructed in order to allow the crane a safe working space for the erection of the formwork.  The anchor blocks can be seen in Figure 6.

Works will continue to enable the bridge deck and this is planned to be moved into position in the summer. The Northbound off-slip will have kerbs installed and the work to the subbase will be completed.  Shortly after this, surfacing will commence to complete this section of road.  Once complete, it is planned to switch traffic onto this new road to enable the second half of the new slip road to be constructed.