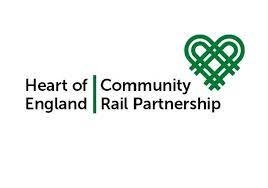 The Heart of England CRP is joining other community partnerships and volunteer groups across Britain to spearhead a national campaign highlighting sustainable travel as a key factor in tackling the climate crisis, in the build-up to COP26.

Community Rail Week, organised by Community Rail Network and sponsored by Rail Delivery Group, is the first event of its kind in the UK and will see hundreds of local partnership projects and volunteers getting involved to promote green travel by train during 18 - 24 October.

Many activities during the week will be focused on youth engagement, as a new survey shows that seven in ten young people support greater use of trains in the future.

With greener transport now recognised as a fundamental part of the solution to climate change, Community Rail Week, with the tagline ‘Go Green by Train’, looks to drive change at a community level through the efforts of 74 community rail partnerships and over 1,000 station friends’ groups across Britain.

Transport has a huge role to play if the UK is to reach its target of reducing greenhouse gas emissions by 100% of 1990 levels, or ‘net zero’, by 2050. Figures show that:

During Community Rail Week the Heart of England CRP will be hosting two events.  The first will be a pledge day on Wednesday 20th October at Coventry Station. We will be asking station users, local MPs, members of our partner organisations and more, to sign our ‘Going Green by Train’ pledge.  We will be at the station from 7am – 1pm and we will be raising awareness of the difference people can make by travelling sustainably by rail.

Our second event is our Sustainable Stations workshop on Saturday 23rd October, developed in partnership with Coventry Transport Museum.  We will be based in the Our Future Moves exhibition at Coventry Transport Museum from 10am – 3.30pm and we are inviting families to learn about sustainability in the rail industry and have a go at making their own Sustainable Station and station garden to take home.

Cllr Wallace Redford, portfolio holder for transport and planning at Warwickshire County Council, said: “Awareness of the benefits of leading a more sustainable life has never been greater.  We are delighted to be able to promote the Going Green by Train message as part of Community Rail Week and to highlight the huge environmental benefit of railway travel.”

Craig Mortiboys, Regional Growth Manager for Avanti West Coast, said “We are delighted to be collaborating with Heart of England CRP during Community Rail Week promoting the Go Green by Train message, and highlighting the work we are doing today to look after tomorrow”

As part of the week, Community Rail Network has released results of a survey of 1,000 16–24-year-olds, detailing their current travel habits and attitudes to green travel: 6

Jools Townsend, chief executive of Community Rail Network, said: “As we approach the international climate talks in Glasgow, Britain’s community rail movement is coming together to highlight the great importance of green travel at a local and global level. Transport is now the biggest contributor of UK greenhouse emissions, so we face a pressing challenge to decarbonise the way we get around, for the sake of future generations – plus our communities can benefit now from reduced traffic and pollution. Rail, combined with buses, walking, cycling, and shared mobility, provides a huge part of the solution: shifting as many journeys as we can onto these modes, and reducing private car use, can help us forge a more sustainable, healthy, inclusive future.

“We’re excited to launch our first Community Rail Week with events and activities in communities across Britain, raising awareness and exploring how we can enable and empower more people to feel confident and able to go green by train.”

Andy Bagnall, director general at the Rail Delivery Group, said: “Trains are inherently green so when people go by rail it’s more than a journey – it’s literally helping to save the planet!

“In future, we want trains to be the backbone of a decarbonised transport network so, as well as supporting initiatives like Community Rail Week, we want to work with government to reform ticketing and fares – if it’s easier for people to find and buy a good value ticket, more people will use rail as a green alternative to other ways of travelling.”