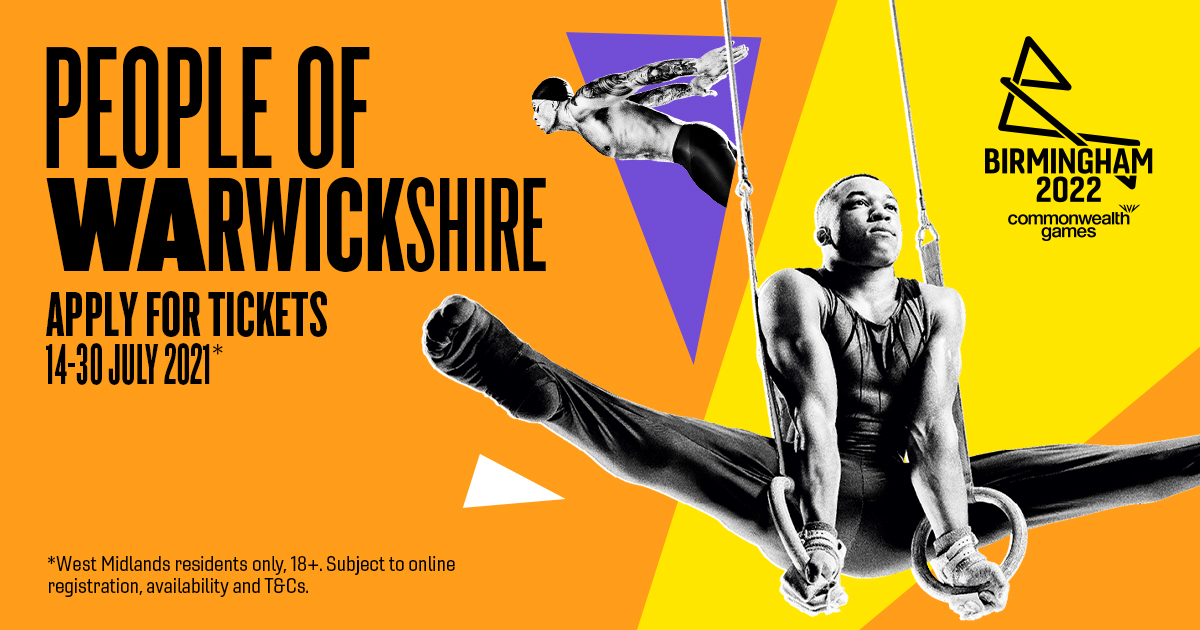 Warwickshire residents are encouraged to be part of history and book their tickets for the Birmingham 2022 Commonwealth Games.

The Birmingham 2022 Commonwealth Games is coming to Warwickshire next summer, with the Road Race taking place in Warwick and the Lawn Bowls and Para Lawn Bowls taking place in Victoria Park in Royal Leamington Spa. Between 14 - 30 July residents of Warwickshire have an exclusive chance to apply for tickets as part of the West Midlands Ticket Ballot.

Local residents are being urged not to miss out on this fantastic opportunity to access the regional ballot before the main ballot opens in September. Anyone can create their ticket account and select tickets at: www.birmingham2022.com/tickets.

In total there are 286 sessions across 19 sports and eight para sports, including athletics, swimming, gymnastics, and netball, as well as a host of new sports including women’s cricket T20, basketball 3x3, wheelchair basketball 3x3 and mixed synchronised diving, so there is something for everyone.

The ballot is open to the residents of the West Midlands region, this includes people living in the counties of Warwickshire, Herefordshire, Shropshire, Staffordshire, West Midlands and Worcestershire. To check eligibility, use the postcode checker at www.birmingham2022.com/tickets if you miss out on this round of tickets you can apply again in September, as the main ballot is open to everyone.

Cllr Izzi Seccombe, Leader of Warwickshire County Council, said: “Warwickshire County Council is very proud that the location of the Birmingham 2022 road race will be Warwick and that, with our partners in the District Council, we will be hosting this incredible event during the Games. The Games coming to our region is truly a once in a lifetime event and having early access to the ticket ballot is something that I hope many of our residents will take advantage of.

“It’s a packed roster of world-class sporting events throughout the Commonwealth Games, from cycling to swimming, Lawn Bowls to basketball, so there really is something for everyone and with tickets starting as low as £8 for under 16, there is no better time than now to book your seats for West Midlands history.”

Cllr Liam Bartlett, Portfolio holder for Culture, Tourism and Leisure said: “The Birmingham 2022 Commonwealth Games is coming to Warwick District next July. This will be a unique opportunity for residents of the district to attend a world-class sporting event through volunteering or being a spectator at this fantastic event.”

To coincide with the West Midlands ballot, Birmingham 2022 has unveiled a newly refurbished basketball court in Summerfield Park in Ladywood, Birmingham. The court has been designed by Team England basketball player Kofi Josephs and local graffiti artist Zuke, who painted a bespoke, colourful mural onto the court.

The revamped space aims to inspire participation in the sport and is part of a wider plan to ensure the Games leaves a lasting legacy in Birmingham and the West Midlands.

Joining Kofi Josephs and Zuke at the launch were Team England basketball players and representatives from local basketball clubs, as well as the Mayor of the West Midlands Andy Street, leader of Birmingham City Council councillor Ian Ward, the deputy chair of the Birmingham 2022 board Geoff Thompson, Councillor Sharon Thompson and Councillor John O’Shea.

Matt Kidson, Director of Sport for Birmingham 2022, commented:“Birmingham 2022 is a once in a lifetime opportunity for residents of the West Midlands, with the Games being held, essentially, in their backyard. We want to make sure that everyone who lives locally has a chance to experience the Games, through volunteering, spectating, or soaking up the festival atmosphere – that’s why we are launching a priority access ticket sale today for people with a West Midlands postcode. This is your chance to experience the biggest sporting event to be held in the UK for a decade.”

Nigel Huddleston, Minister for Sport and Tourism, said: "Birmingham 2022 will be the greatest show ever staged in the West Midlands and I am thrilled that local residents have the first chance to secure their tickets.

"This is a once-in-a-generation opportunity for fans to see the best athletes in the world compete on their doorstep. I encourage everyone to take a look at the exciting sports on offer and apply for their tickets."

Andy Street, the Mayor of the West Midlands, said: “The Commonwealth Games in Birmingham is going to be an absolutely phenomenal spectacle, and we want as many people as possible from across the West Midlands to enjoy the world-class sport and soak in the atmosphere.”

“That’s why the Games are offering priority access to tickets for those who live in the region, ahead of the main ballot opening in September. This really will be a once-in-a-lifetime opportunity, so don’t miss out.”

Cllr Ian Ward, Leader of Birmingham City Council, said: “With the opening of the priority ticket ballot, Birmingham 2022 is firmly within our sights on the horizon. I am delighted the people of Birmingham will be amongst those getting the first opportunity to buy tickets for 11 days of fantastic sporting action, taking place at a range of superb locations in their city and further afield. The Games will show off the best of Birmingham as the Proud Host City and this is your chance to secure your attendance at the largest event to be staged in our history.”

Paul Blanchard, Commonwealth Games England Chief Executive, said: “Team England athletes will really appreciate the passionate, loud and energetic support of the West Midlands public behind them as they compete for their nation. A home Games is a once in a lifetime opportunity for most athletes which adds a special sense of pride when representing England.”

To be a part of the biggest ever Commonwealth Games, set up your ticketing account and apply for tickets today at www.birmingham2022.com/tickets the West Midlands ballot closes on 30 July.

The Games’ organizers are also looking for an army of 13, 000 volunteers to join the Commonwealth Collective of essential volunteers. Would you like to be involved in making history? Find out more:  https://www.birmingham2022.com/get-involved/volunteering/