In some small, open-plan, single-storey offices and shops, a fire may be obvious to everyone as soon as it starts. In these cases, where the number and position of exits and the travel distance to them is adequate, a simple shout of ‘FIRE’ or a simple manually operated device, such as a gong or air horn that can be heard by everybody when operated from any single point within the building, may be all that is needed. Where a simple shout or manually operated device is not adequate, it is likely that an electrical fire warning system will be required. 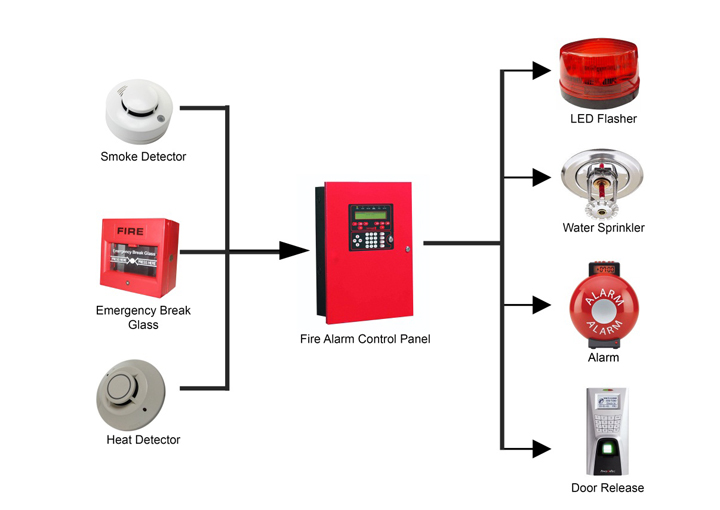 Automatic fire detection may be needed for a number of reasons. These can include:

If you have an automatic fire detection system, the system should:

New automatic fire detection systems should be designed and installed by a competent person. Further guidance is given in BS 5839-1.

If your fire alarm system is linked to an Alarm Receiving Centre (ARC) you should ensure that when the building is occupied the cause of any alarm is investigated locally and calls to the Fire and Rescue Service only made if a fire is discovered. When the building is unoccupied, arrangements will need to be agreed with your ARC to safely investigate the cause of any alarm, normally by the use of a local ’key holder’. It is important to understand that the primary purpose of an automatic fire alarm system is to ensure that persons within a building are notified quickly of a fire so that they can escape safely, they are not systems for requesting the attendance of the Fire and Rescue Service.

All calls received following the activation of an AFAs will be subject to verification as to whether a fire or direct indication of fire (i.e. smoke, smell, noise, flame) can be confirmed.

Between 7:00 and 20:00hrs
The caller will be told, “We are making no attendance at this time; please re-contact us if a fire is confirmed.” The call will then be abandoned.

Between 20:00 and 7:00hrs
The caller will be told, “We are on our way, please re-contact us if a fire or false alarm is confirmed”

Where calls are received directly from private domestic premises, a full predetermined attendance will be mobilised on all occasions.

There are occasions where the potential risk or loss from fire outweighs the risks associated with attending false alarm calls. As such all identified premises posing a significant risk or loss will be individually assessed and, where appropriate, an enhanced AFA mobilising response will be specified and placed against the premises.

False alarms from automatic fire detection systems are a major problem and result in many unwanted calls to the Fire and Rescue Service every year. If there are excessive false alarms at your premises, people may become complacent and not respond correctly to a warning of a real fire. In such circumstances, you may be failing to comply with fire safety law. All false alarms should be investigated to identify the cause of the problem and any necessary remedial action. To help reduce the number of false alarms, the system design and location of detection and activation devices should be reviewed against the way the premises is currently used. For example, if a storeroom that is fitted with a smoke detector, is converted to a staff area with cooking facilities, such as a microwave and toaster, then the likelihood of the detector being set off is increased. Consequently, subject to the outcome of a fire risk assessment, a heat detector may be more appropriate.

How to investigate your fire alarm

When you investigate, use your senses and, if at any time you find signs of a fire, retreat from the building and make sure the Fire and Rescue Service are called on 999. Ensure your building is being evacuated in accordance with your alarm procedure, before doing anything else.

Remember you are looking for signs of a fire, not a fire itself.

At any time, if you suspect or find a fire, get out and call the Fire and Rescue Service on 999.