During December, work continued in a number of locations, including the northbound off slip; new A46 Bridge; the southbound off slip tie-in and Westley Bridge construction

During December, work continued in a number of locations, including the northbound off slip; new A46 Bridge; the southbound off slip tie-in and Westley Bridge construction.  The new area of work to the northbound off slip aims to widen the earthworks in order to re-align the road on the approach to the new gyratory.  The earthworks operation for the new link road from the Dalehouse Lane roundabout to the A46 Bridge has now been completed.  Subsequent work is now taking place to construct the actual road, including excavating for the road foundations and installing drainage and kerbing. These activities will continue well into the new year.

Since the beginning of December, work has been ongoing to construct the pile cap on the north side of Finham Brook as illustrated in Figure 1.  This initially involved inserting the steel reinforcement prior to erecting the formwork (which is effectively the temporary mould that keeps the concrete in place when it is poured and ensures it produces the required shape).  The steel was fixed around the protruding pile reinforcement and was a key part of completing casting of the pile cap.  Following this, bituminous paint is applied to the concrete to act as a waterproof membrane to protect the concrete after the pile cap is buried in the ground.  This paint can be seen in Figure 2.

The next step for the north side of Westly Bridge is to bury the pile cap in a suitable ground material and then following this, further steelwork will be fixed to the protruding steel from the pile cap in order to create the next stage of the bridge abutment wall.  In the future, formwork will be installed ready for the concrete pour and the abutment wall cast and the same general process will be undertaken on the south side.

Pile cropping has taken place on the south side together with partial completion of the reinforcement cage in order to prepare for constructing the pile cap and subsequent abutment foundations in the new year.  This can be seen in Figure 3.  This will be conducted in a similar manner to the pile cap on the north side. 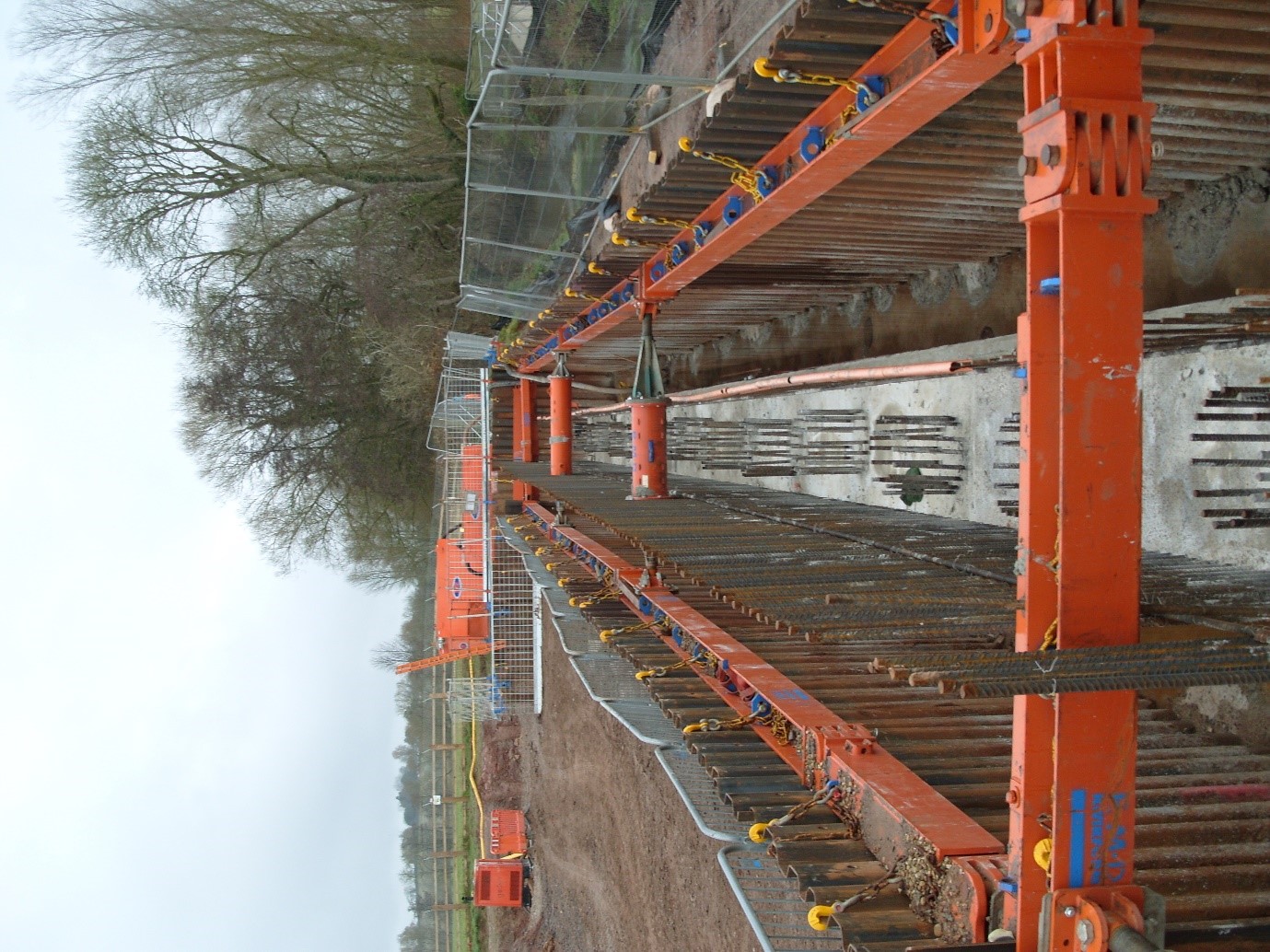 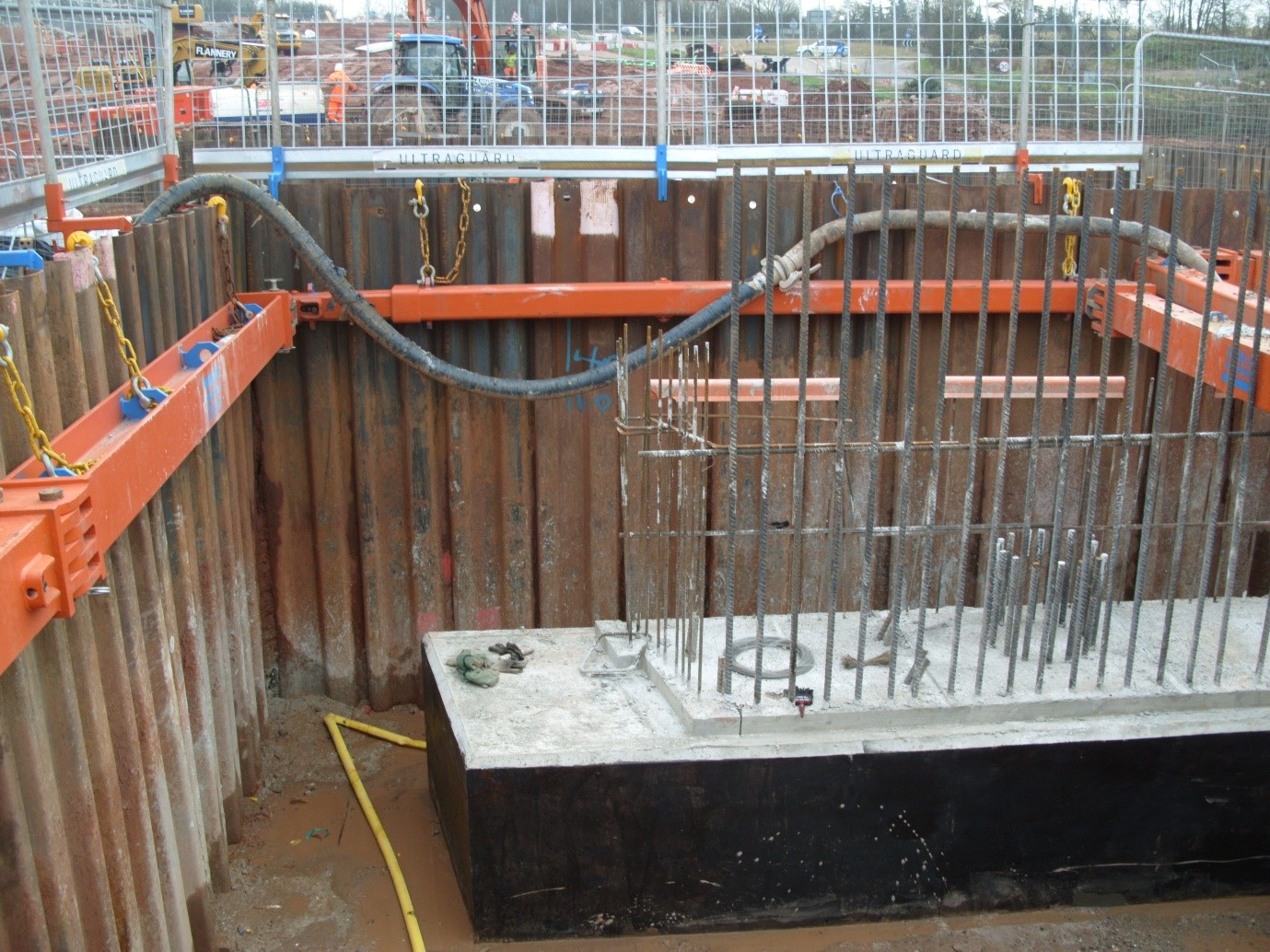 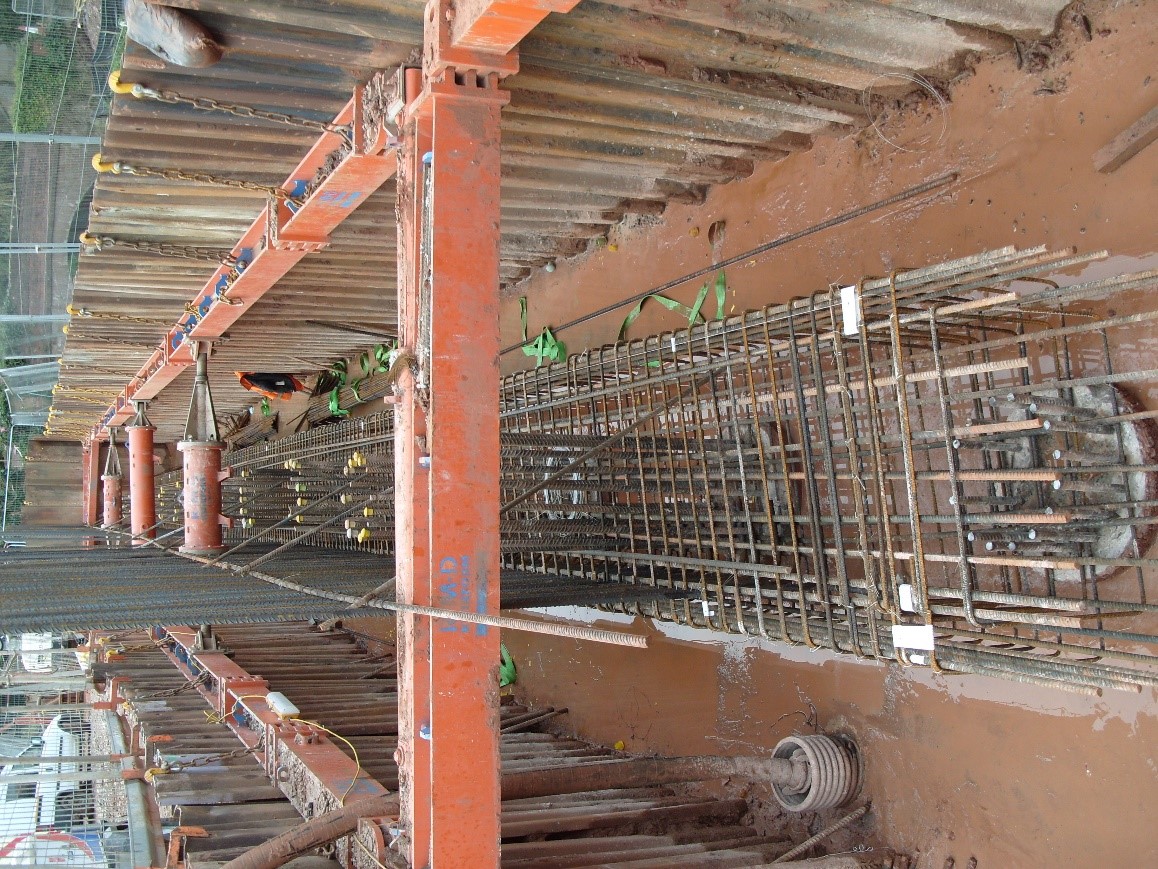 In order for the slip road to meet the new gyratory safely, it is necessary to realign approximately half its length by, in effect, moving it closer towards the A46.  This involves constructing a new embankment to allow for the road to be realigned.  Following the northbound off slip single lane closure on the 30th November, work has commenced in terms of installing this new embankment. 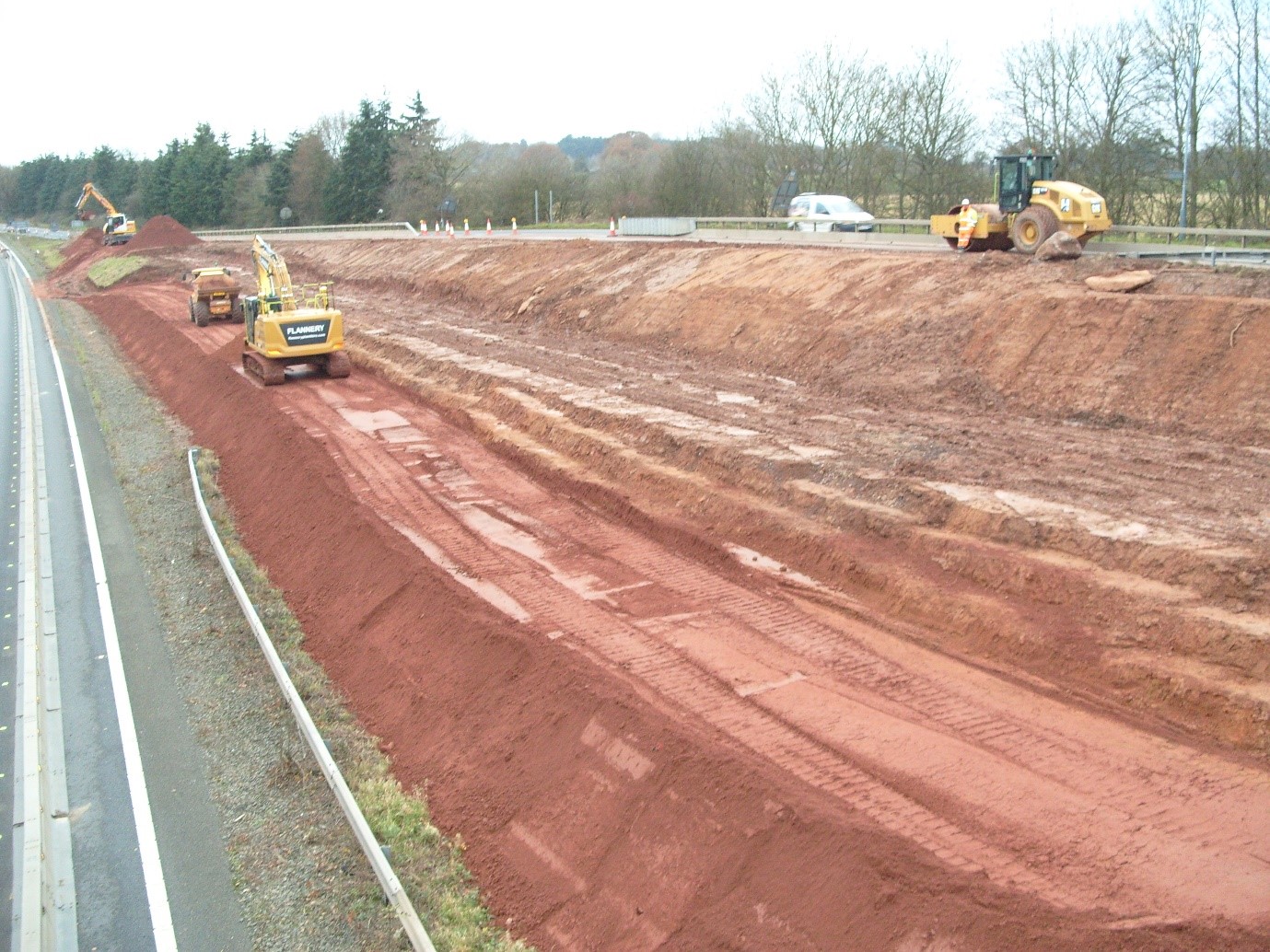 A significant milestone has occurred in this area of the project with all eight beams now in place on the trestles.  The final set of beams were delivered on the 11th December under a weekend closure of the A46 main carriageways in both directions.  Figure 5 illustrates the beams currently positioned in the working area where the bridge deck will be constructed.  Going forward, scaffolding will be erected over these beams with temporary handrails to allow site operatives to work around the beams and construct the bridge deck.  The process involves construction of the permanent formwork, followed by a reinforcement mat and finally a concrete pour across the top which will tie the steel beams into the concrete deck.

Separate to this, a rock cut excavation has been undertaken at the site of the new A46 bridge abutment which is vital in order to start building the bridge foundation.  The plan is for construction of the spread foundations in the new year with work starting on the west side. 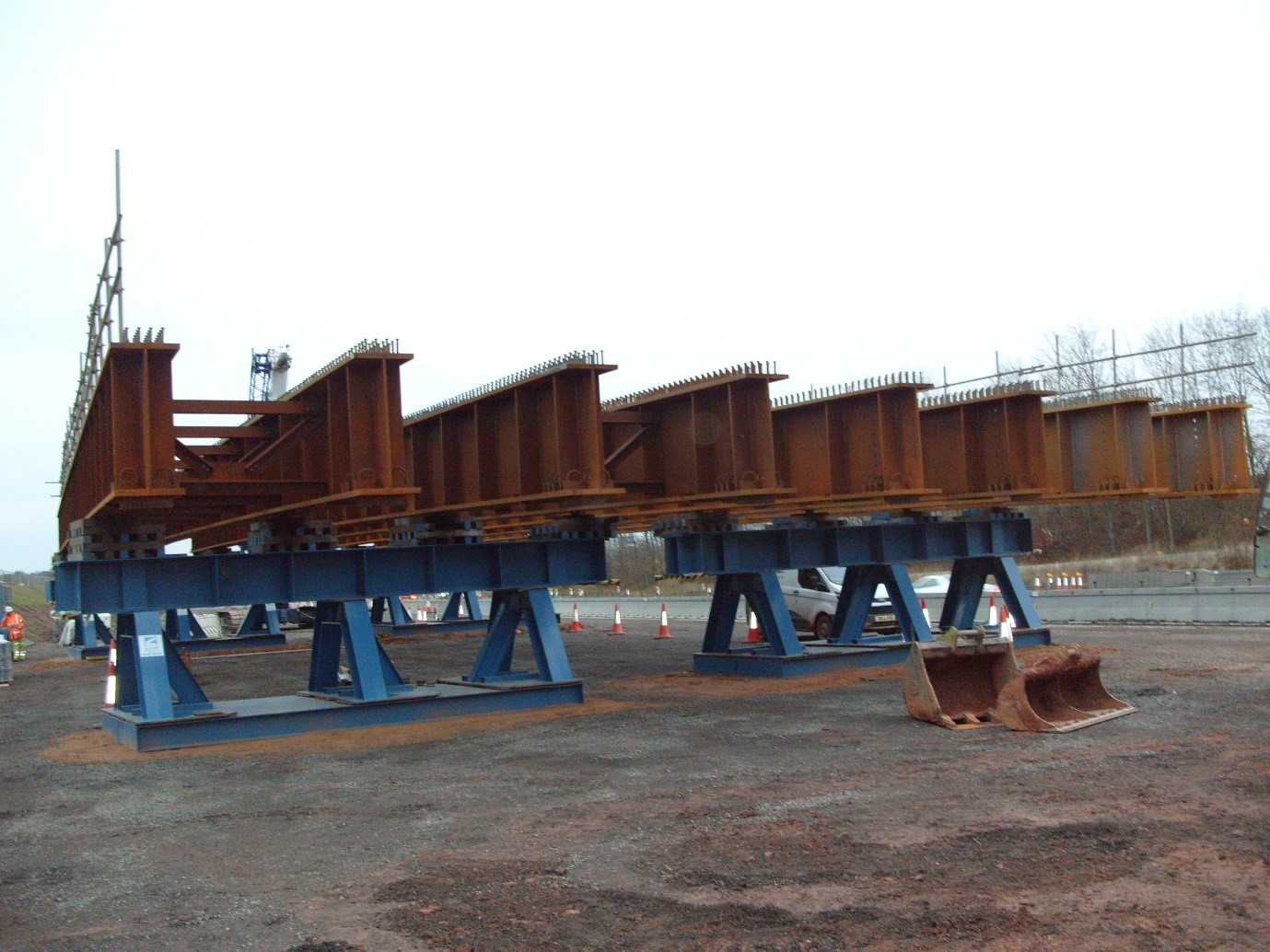 Work on the southbound tie-in will continue into the new year with the relocation of an existing drainage manhole to prevent obstruction to the new slip road.  Crucially, this aspect of construction requires careful planning to ensure there is no disruption to the drainage flow when creating the chamber.

Night work was undertaken on the 21st and 22nd December to install the finished surfacing on the southbound off slip and eastern gyratory.  This is the final road surface that will ultimately carry public vehicles when the road is open fully.

In the new year, the southbound off slip tie-in to the mainline A46 will be completed allowing it to be opened along with the eastern gyratory within the first few months.  The existing southbound slip road will be decommissioned, and a new working area created to allow for the construction of the east abutment of the new A46 bridge.

From the 24th December, the site was closed for the Christmas break and will return on the 4th January.  However, traffic management on the mainline A46 and slip roads will be in place across the Christmas break for the safety of the public.  A skeleton site team will be present on site 24 hours a day to deal with any issues that may arise.

The A46 Stoneleigh Project Team to take this opportunity to apologise for any issues caused by our ongoing works and to thank the public for their support.