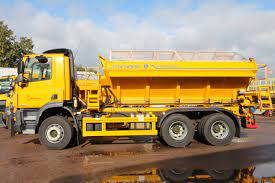 Warwickshire County Council is reassuring residents that highways across the county will continue to be gritted this winter.

With the winter gritting period poised to begin over the coming weeks, Warwickshire County Council is reassuring residents that, despite media claims to the contrary, its gritting fleet is unaffected by the ongoing shortage of Heavy Goods Vehicles Drivers and will operate as normal over the winter months.

Warwickshire County Council has 5 dedicated depots for the gritting fleet, one on each geographical area of the county and have six weather stations and even employs a dedicated winter roads weather forecaster to help decide when there will be a need to grit.

Cllr Wallace Redford, Warwickshire County Council Portfolio Holder for Transport and Highways said: “Our gritting fleet in Warwickshire always does a fantastic job keeping the network running smoothly across the winter months and this season will be no exception. Due to fantastic resilience planning within the service, its core business of clearing the county’s roads will be affected by the nationwide shortage of HGV drivers.

“The work of the Service this season will be of continued importance keeping the roads clear of snow and ice for motorists and particularly Warwickshire’s key and essential workers.

“Last winter season saw the Service welcoming five replacement gritters to the fleet, which were selected based on their low emissions so that WCC can keep its commitment to doing all that it can to reduce its carbon footprint and minimise its impact on climate change. “

The replacement gritters were part of a successful competition in November 2020 that gave residents the opportunity to name them. The new gritters are called:

The last two names on the list – Charlie Boy and Grey13 Hero – were particularly poignant suggestions for some of our residents:

Charlie Boy is named in memory of Charlie Round, a little boy from Nuneaton who sadly lost his battle with a rare form of childhood cancer in 2019. Charlie is remembered as a little boy who, despite facing incredible adversity, lit the world around him with an amazing smile and outlook. The Gritter bearing this name will serve Nuneaton, where Charlie and his family lived.

Grey13 Hero is named in memory of Jack Mitchell (John Arthur Mitchell) and was put forward by his daughter, Alison Mitchell. Jack worked for Warwickshire County Council for over 50 years, including on the County’s gritting fleet at a time the service was carried out by shovelling the grit off the back of a truck as it went along Warwickshire’s essential routes. Grey13 was Jack’s call sign from his time working on the gritters. The gritter bearing his name will serve the area of Cubbington where Jack lived.

Watch out for these new gritters across the County from late October onwards.

During the upcoming gritting season, Warwickshire County Council also plans to replace three more gritter lorries in the fleet with second hand vehicles, which will be selected based around the  same criteria of lower emissions and reduced maintenance costs.

For more information about how Transport and Highways in Warwickshire, visit: https://www.warwickshire.gov.uk/roads-transport