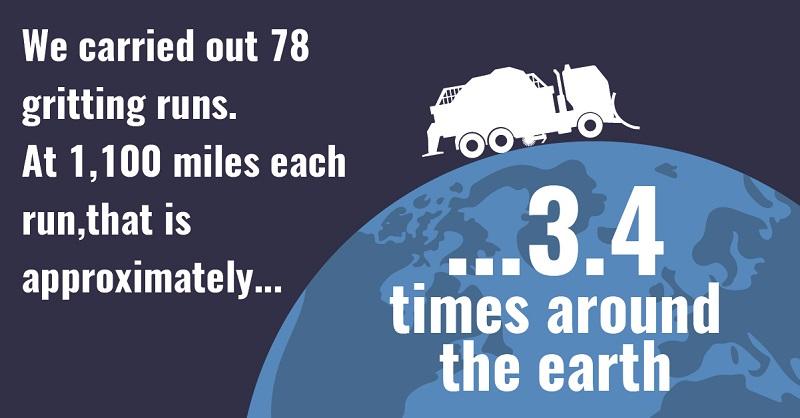 Friday 23 April marked the end of the 2020/21 Winter gritting period, which runs between October and April.

Warwickshire County Council has 5 dedicated depots for the gritting fleet, one on each geographical area of the county and have six weather stations and even employs a dedicated winter roads weather forecaster to help decide when there will be a need to grit.

Mark Ryder, Warwickshire County Council Strategic Director for Communities, said: “Our gritting fleet in Warwickshire always does a fantastic job in keeping our highway network running smoothly and safely over the winter months. This season has been no exception”.

“The work of the Service this winter has been particularly important, keeping the roads clear of snow and ice for Warwickshire’s key and essential workers during the COVID-19 pandemic.”

In addition to this, the winter season saw the Service welcoming five new gritters to the fleet, which were selected based on their low emissions so that WCC can keep its commitment to doing all that it can to reduce its carbon footprint and minimise its impact on climate change.

The last two names on the list – Charlie Boy and Grey13 Hero – were particularly poignant suggestions for some of our residents:

Charlie Boy is named in memory of Charlie Round, a little boy from Nuneaton who sadly lost his battle with a rare form of childhood cancer in 2019. Charlie is remembered as a little boy who, despite facing incredible adversity, lit the world around him with an amazing smile and outlook. The Gritter bearing this name will serve Nuneaton, where Charlie and his family lived.

Grey13 Hero is named in memory of Jack Mitchell (John Arthur Mitchell) and was put forward by his daughter, Alison Mitchell. Jack worked for Warwickshire County Council for over 50 years, including on the County’s gritting fleet at a time the service was carried out by shovelling the grit off the back of a truck as it went along Warwickshire’s essential routes. Grey13 was Jack’s call sign from his time working on the gritters. The gritter bearing his name will serve the area of Cubbington where Jack lived.

For more information about how Transport and Highways in Warwickshire, visit: https://www.warwickshire.gov.uk/roads-transport